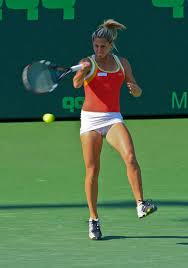 Maria Elena began playing tennis at age 10 with her father. She is a baseliner whose favorite shot is the backhand; and her favorite surface is clay.