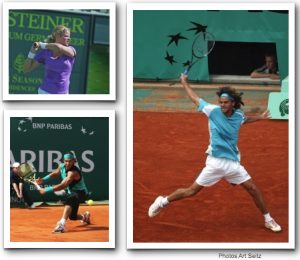 Back in 1968, after five years on the tour, I had an idea. What would happen if I synthesized the common traits of the best players of all time and applied them to everyone, from kids and beginning players to adults of all levels? My testing ground wound up to be the Beverly Hills Tennis Club. With the endorsement of Pancho Segura, who witnessed the results with some of his most famous Hollywood clients, the new concept was born.

I tested this coaching methodology in Spain in 1973 at the national junior team level and the results were astounding. Rather than a few players succeeding in competition, all players showed progress and confidence. Spain adopted this methodology, and modern tennis history was formed.

Uncomplicated by false data which has plagued tennis for decades, MTM™ (Modern Tennis Methodology™) mirrors the simplicity of how the top players actually play. Popularized by my tips and appearances on ESPN International and my books and videos around the world, MTM has become the universal key to tennis success.

MTM, as a methodology, has influenced players and coaches from Moscow to Buenos Aires, from all of Europe to Asia. Today all top players apply these principles, whether learned by instinct or taught.

MTM even works in relatively inexperienced hands. It is not original. It is based upon the mechanics of natural laws and the strokes of the greatest players of all time. With directness and simplicity it arranges an assortment of previously disordered data.

Over the years I have disseminated MTM through books, print publications, radio and television appearances, a significant internet/social media presence, private lessons, clubs, municipal programs and at the invitation of tennis organizations around the world.  With the introduction of the MTM-U program and the New MTM Certification Levels I am pleased to offer yet another avenue of access to the system that has helped countless players and coaches to enhance their tennis experience. I invite you to join us.

With my best regards and wishes,