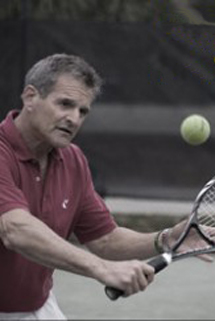 Lenny has lived in Charleston for the past 12 years. He was born in Florida, lived in Alabama and Baltimore as a kid, went to college in Tennessee, travelled on the pro tour then returned back to Baltimore. He started playing tennis at 15 and by the time he was 21 had become an All American at the University of Tennessee, where he had earned a full scholarship. He was City, State, and Regional champion, the first All Americain at the University of Tennessee and first to be put in University of Tennessee Hall of Fame. He became one of the top 10 Americans on the pro tour. Lenny had very little formal coaching, playing instead from natural instinct. As he puts it, “There were days when I had great wins and days were I had bad losses and could never understand what caused this.”

After a career-ending injury in 1973 the inconsistency of success and failure on the court motivated him to investigate scientific breakthroughs, leading to the discovery of how to recover instinct and feel and revealing how poor coaching can break down the inherent ability of one’s eyesight, which ruins balance and timing. As a result, Lenny developed the Eye Coach, and has spent the past 15 years evolving a product designed to strengthen the eyes and tap into the player’s natural athletic ability in tennis.

Lenny has had the opportunity to approach 15,000 players and hundreds of coaches who have worked directly and indirectly for him through his academies, and boasts $50 million of revenue in the tennis industry – $20 million in tennis instruction alone.

The Eye Coach allows the player to be the best athlete he was born to be, and lends itself to MTM techniques. According to Lenny, “The MTM system, which blends in with how we are born and naturally designed will give the best results. Coaches who use MTM will use the Eye Coach and get better results than coaches with other methods.”

“Oscar is a thought leader whom I respect on many different levels, and the most important level that Oscar brings to us is a way we can all help the game grow. Nothing great has ever happened without a passion and an enthusiasm to persevere when you’re not in the mainstream, and without these types of people in our would we’d still be living in the past.”