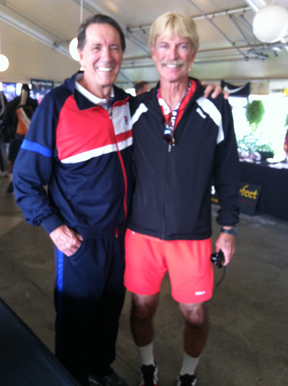 Tennis has been Ken’s passion since he first saw it played on the courts as a freshman at Cambellsville College in Kentucky while running cross country to stay in shape for basketball.

He immediately went to K-mart and bought his first racket and went to find a wall and someone to play with. He was hooked. Summer school allowed him to play more tennis and in his sophomore year he asked the coach if he could join the team. In his junior year he played # 3 singles and won the KIAC Conference doubles championship. In his senior year he played #2 singles and was co-MVP of the year. He went to graduate school at Western Kentucky and was able to pay for his Masters degree by teaching tennis and other sports on a graduate assistantship.

Because he still competes nationally, Ken has empathy for players who experience the pressure of match play. He understands not being able to execute skills one knows one has, how to rejoice in winning but rebound and learn from losses. Ken has been a gold medal winner in the World Senior Games, the Bay Area Senior Games and a silver medalist in the Nike World Senior Games. His ranking for the teaching pros has been in the top 5 since his 30’s in either the USPTA or PTR with national championships in both singles and doubles.

Ken has played and taught tennis for most of his life since the age of 19. He has been able to travel around the USA and the world to learn from the best coaches and to offer training to over 4,000 coaches and pros.

Ken’s parents had moved to Phoenix, Arizona and he interviewed for a position there and became the Director of Tennis for 10 years at the largest club in Phoenix – the Western Reserve Club with 31 courts and the largest tennis program in the Southwest.

While this may sound like a lot of moving around the country, Ken found each experience a positive career move and considers that all those opportunities have provided him with insights into how the game has changed, how it is taught, how to motivate players and how to build a program.