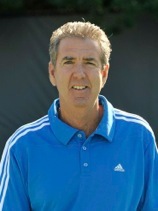 John and his sister Tracy Austin were the first brother-sister team to win the Wimbledon championship title in 1980 in Mixed Doubles. Born into a family of five siblings, tennis is in the Austin DNA, as four of them competed at Wimbledon. Austin climbed the international rankings to a Top 40 world ranking in six years competing on the ATP Tour. Among his wins were victories over # 1-ranked John McEnroe, former French Open champion Yannick Noah, Andres Gomes, Wojtek Fibak, and twins Tim and Tom Gullikson. He was also selected three times as an alternate/practice partner for the U.S. Davis Cup team.

Prior to entering the professional ranks, Austin was a member of the victorious 1976 UCLA NCAA championship team and a 1978 NCAA doubles champion. He reached the NCAA doubles final in 1977. Upon retiring from the professional tour, Austin has been a teaching pro, working with players such as Pete Sampras, Michael Chang, Jim Grabb, Chuck Adams and Alexandra Stevenson.